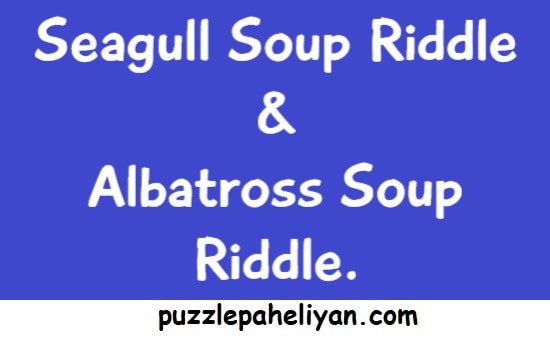 Seagull Soup Riddle is one of the trickiest and hardest riddles. Here I have given the answer and tried to explained the riddle with best possible answer. The riddle is same as the “Albatross Soup Riddle.”

Answer: The answer to Seagull Soup Riddle is that the men was in regret of killing their friends.

The best possible answer which I felt after reading this riddle is that, the men was trailing along with his friends on a rescue boat and his wife was not alive at the moment when he killed himself. On the boat he also tried to kill the Seagull or Albatross and he miss it and he was hungry.

So, from all of this point the answer which comes to my mind is that when is tasted the soup the flavor of the soup was different what he may have tasted. But he has never able to kill the Seagull or Albatross on the boat so how he remembers the taste of the soup. It means he had eaten something else on the boat and he thought he is eating soup. Which clearly state that he has tasted the body of their friends and as they were not with him when he came to restaurant.

Due to the different taste is realizes that he has done something wrong and he decided to kill himself.