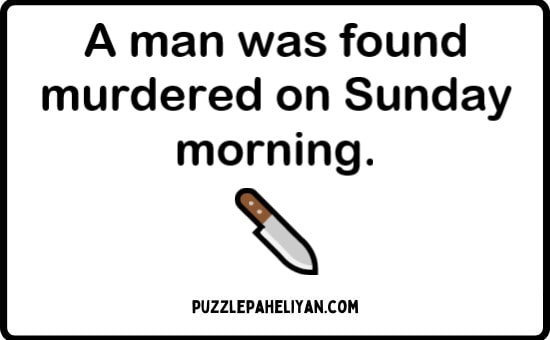 “A man was found murdered on Sunday morning. His wife immediately called the police. The police questioned the wife and staff and got these alibis:
The Wife said she was sleeping.
The Cook was cooking breakfast.
The Gardener was picking vegetables.
The Maid was getting the mail.
The Butler was cleaning the closet.
The police instantly arrested the murderer. Who did it and how did they know?”

A Man Was Murdered on Sunday Morning Riddle Answer

Answer: The answer to “A man was murdered on Sunday morning” is “The Maid”. The maid is the real culprit here because she is the only one who is doing some odd work like collecting mail on Sunday.

The riddle is a little detective type riddle and you have to think logically to get the correct answer.

If you read the riddle carefully it talks about the Sunday and everyone is doing their job. But when the maid said she was getting the mail the police sense something fishy because generally you don’t get mails on Sunday so she must be lying and police arrested him.