Here is the answer to this very popular murder mystery riddle called “George manly murder riddle”. Given below is the full explanation to this very hard riddle. 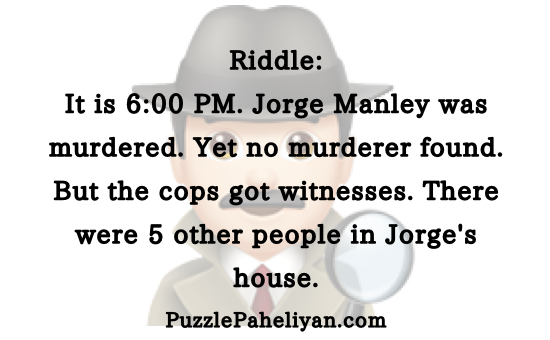 Riddle: It is 6:00 PM. Jorge Manley was murdered. Yet no murderer found. But the cops got witnesses. There were 5 other people in Jorge’s house. The Chef said he was cooking dinner. The Gardener said she was gardening. The Auntie was playing chess with her brother. The Wife said she was watching TV. And then the grandfather said he was on his wheelchair. Who murdered Jorge Manley?

Answer: The answer to “George manly murder riddle” is “The Aunt”.

As we know there were only 5 people in the house (Aside from Jorge).

But the aunt said she was playing chess with his brother so where did this 6th person came that why she was lying.

some of the people are also searching this riddle as “George mandly murder riddle”.