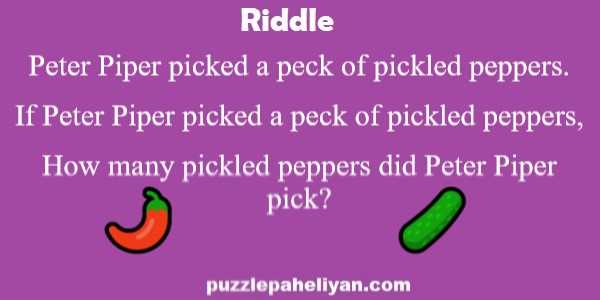 People of all ages have enjoyed the popular tongue twister “Peter Piper” riddle. This riddle is a fun way to practice language skills and test your ability to focus and concentrate. It is also a reminder that sometimes the answer to a riddle is hidden in the wording of the question and can be revealed by carefully analysing the language and meaning of the words used.

The key to solving this riddle is to focus on the language and wordplay used in the question. The repetition of the phrase “Peter Piper picked” and the use of alliteration (words that begin with the same sound) make it difficult to say the riddle quickly and clearly.

However, if you take the time to carefully enunciate each word and pay attention to the meaning of the sentence, the answer becomes clear: Peter Piper picked a peck (a unit of dry volume equal to 8 dry quarts) of pickled peppers, and the peck of pickled peppers that he picked is still with him.